“Hackberry? That’s a trash tree.” Most of us in Central Texas have probably heard someone say this at least a couple of times. Few species of tree are hated as much as the lowly hackberry. But is this justified? Let’s take a closer look at one of our most prolific native species. 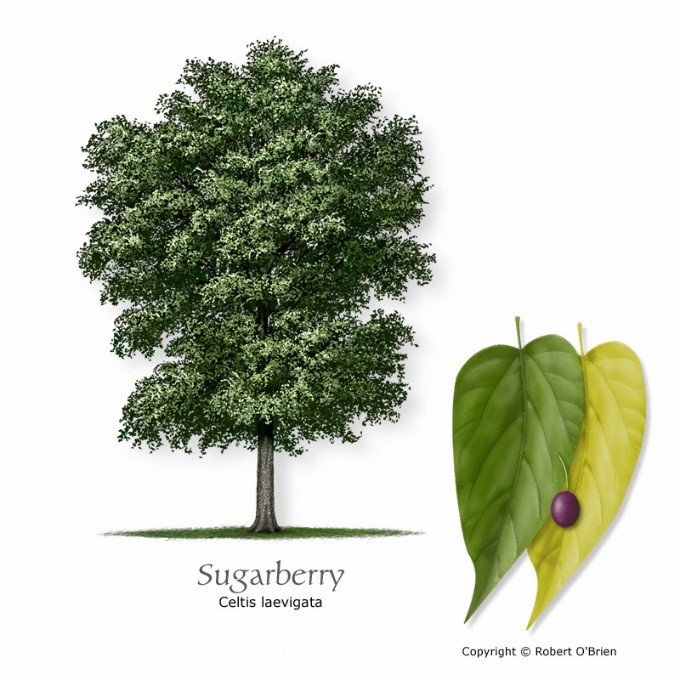 Hackberries are in the Genus Celtis. The name “Hackberry” is derived from Scottish “Hagberry,” or “Bird Cherry.” There are nearly 70 species worldwide. Common names include beaverwood, nettlewood, and sugar hackberry. In the Austin area, three species occur naturally:

These trees are similar in many ways. They are known as fast growers, gaining up to 24 inches a year in height. As members of the Elm family (Ulmaceae), they have broad, arching branches that form a vase-like shape, but they do not suffer from as many diseases as other elms. Their leaves are yellowish to dark green, with a rough surface and a distinctive pattern in the veins that makes identification of hackberries easy with practice. (Alternate leaves, simple, 2-5 inches, spearhead with strong unequal leaf base, toothed margins.) The scars left behind where the leaves attach are usually shaped like half-circles. Flowers grow from April to May, and are a good source of nectar and pollen for local honeybees. They are followed by a small fruit, called a drupe, which tastes similar to dates and is a valuable food source for wildlife. These fruits are produced every year once the trees reach around 15 years old. 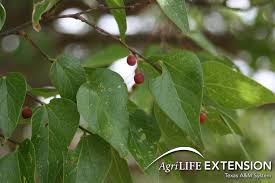 Native Americans began using these trees as early as the 1300s. The dried seeds provide good nutrition, including protein, phosphorus, and calcium. Native tribes added them to corn porridge. Comanches mixed them into meatballs. The flexible wood has also been useful for making things like bows, bowls, and tool handles. Papagos, native to what is now Arizona and Northern Mexico, used the bark to make sandals. Navahos boiled the leaves to create a reddish-brown dye for wool. Today the wood is used mainly for furniture, pallets, firewood, and sporting goods. Bonsai artists also find them to be a good tree to work with.

The most common Celtis species in our area is the Sugarberry, C. laevigata. It reaches a mature size 50 feet tall and 50 feet wide. Young trees have smooth, light-gray bark that develops knobby “warts” as the tree ages. This could be a defense that evolved to protect the trunks from deer that like to rub their antlers against the bark.

The bias some people have against these trees is not completely without cause. The wood can be brittle and weak, even more so when the tree becomes infected with parasitic mistletoe. Branching structure tends toward tight, vee-shaped crotches that are prone to splitting. Left unchecked, mistletoe often spreads throughout the canopy, which can be unattractive as well as sapping the tree’s food resources. Based on requests to the City Arborist for tree reviews, 15% of our diseased, dead, and imminent risk trees are hackberries. They are also affected by various problems that can be unattractive, such as Nipple Leaf Gall and Witches’ Broom.

Despite its problems, the Sugarberry is a Texas Tough champion. It adapts well to a range of soil types and the poor-quality soils common in urban areas. It is highly tolerant of heat and drought. In fact, it is so sturdy, it frequently survives untold abuse from its haters, which can be a contributor to the problems we see in our lawns and rights-of-way. Treated well, sugarberry can be an excellent neighbor and friend of wildlife. 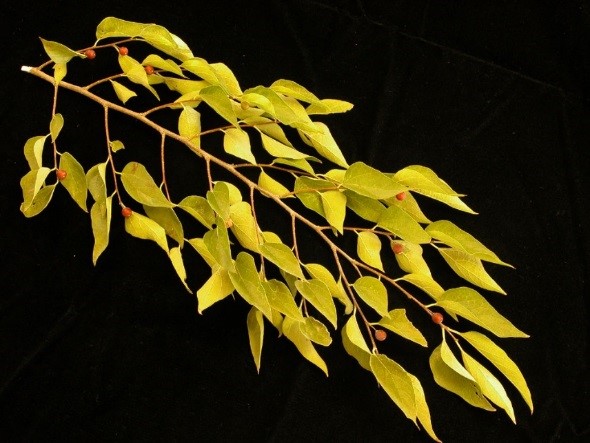 Because our soils tend to be highly alkaline, Austin is not a favorable location for most maples or pines. Our oaks are always at risk of infection by a fungus (Ceratocystis fagacaerum, also known as Oak Wilt). American elms and pecans often struggle to survive our long, intense droughts. Ash trees could be attacked any time by the invasive Emerald Ash Borer. In such a challenging environment, Sugarberries and Hackberries are an important part of our diverse forest. In 2014, an Urban Forest Inventory Analysis found over 5 million hackberries in Austin, which make up more than 6% of our canopy coverage. They provide an estimated $3 billion per year in services, such as: shade that reduces electricity usage; filtration of air pollution; control of stormwater and flooding; and reduced erosion. Far from being trashy, Sugarberries are vital part of our urban forest. Please do what you can to take good care of them if you get the opportunity.

This information is sponsored by the City of Austin. Learn more about trees and resources at the Tree Information Center!