Pauline Lynch Evans Creighton was born on May 18, 1868 in Clay County, Mississippi to Hettie M. Cochran Lynch and Judge James Daniel Lynch.  Little is known about Pauline's life during and after her two years of college, but it is believed that she married H. L. Evans. Together, they had a son, Hugh McCord Evans on March 12,1891.

Pauline's parents moved to Austin, Texas in 1884 and Pauline and her son joined them some time after.  It is not known what happened to her first husband, but Pauline married John Orde Creighton in 1901.  The couple welcomed their first child together, a son named John Orde Creighton, Jr.

Pauline was active in local city improvements, advocating for better sanitary conditions throughout Austin.  She served as the president of the Civic Improvement Club and the Austin Equal Suffrage Association.   In 1914, she joined the Austin Women's Club, working closely with Jane McCallum and Minnie Fisher Cunningham in Washington, DC to promote women's suffrage before congress.

In 1923, Pauline was elected as president of the Austin Altrusa Club, an organization that encouraged women in business to build strong relationships to benefit the community.

Throughout World War I, Pauline worked with the Humane Society and the American Red Cross to aid in humanitarian efforts.  Pauline Creighton died March 26, 1941 and is buried here in the Oakwood Cemetery near her husband, John. 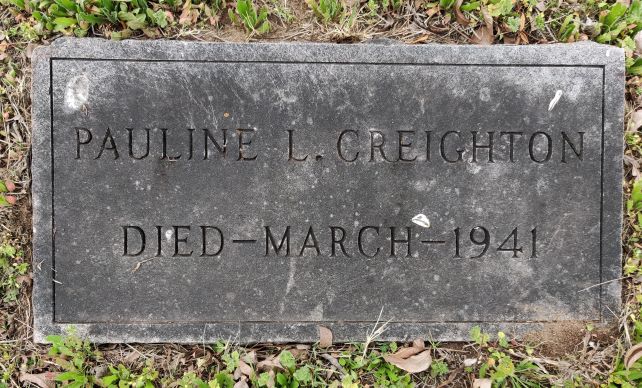