The City of Austin is creating a concept plan for potential future improvements to Adams Hemphill Neighborhood Park. That's because we are proposing to install two stormwater ponds at the park. This effort is part of a project to reduce the risk of flooding between 45th and 33rd Streets. The concept plan will help identify ways to maximize the enjoyment of the park for those who live and work nearby.

Thank you for sharing your thoughts with us. The survey is now closed. We will post the results when they are available.

Thank you to everyone who attended the open house on Dec. 3. Below are links to the displays:

Proposed Changes to the Park

The concept plan will help ensure that proposed changes to the park are compatible with potential future improvements.

New Detention Ponds: We are proposing to build two stormwater ponds in the park as part of the Guadalupe St. Flood Risk Reduction project. This project would help protect more than 117 structures from flooding in the Hyde Park neighborhood on and near Avenue A during a 100-year storm (12.3 inches of rainfall in 24 hours). Flood risk during smaller storms would be reduced for even more homes. The Guadalupe St. Flood Risk Reduction project cannot proceed without the proposed stormwater ponds.

The ponds would be dry most of the time, but would fill with water during heavy rainfall to reduce flood risk. They would take up a large part of the current grassy area in Adams Hemphill Neighborhood Park. Depending on how they are designed, they may be able to double up as open play fields or accommodate other amenities. The map below shows the estimated size and location of the ponds based on currently available information. 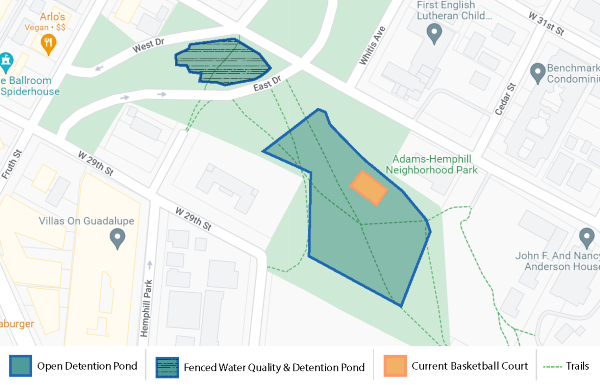 We are currently looking at three designs for the ponds.

Basketball Court, Playground and Backstop: The proposed ponds mean that we would need to move the basketball court, playground and backstop to different locations within the park. With the concept plan, we would like to find out if these are the best amenities for the park or if the community would prefer something else.

Closure of East and West Drives through the Park: East and West Drives currently cut through the park and make it hard to use some of the parkland. Closing these roads, removing the concrete and converting them to parkland would increase the size of the park without having a significant impact on the transportation network. The added space would help compensate for any loss in usable parkland from the detention ponds.

The concept plan will help us ensure that the proposed detention ponds are compatible with possible future improvements to the park. Typical neighborhood park amenities that are possible at Adams Hemphill Neighborhood Park may include:

Please note that there is not sufficient room for all of these amenities, so the concept plan will have to identify a small number that best serve the community. The Guadalupe St. Flood Risk Reduction project would include park mitigation funds and some of the improvements identified in the concept plan may be included with construction of the ponds and the first phase of park improvements. Those details are yet to be worked out.

Other Locations for Detention Ponds

There is little to no undeveloped land near the project area for the Guadalupe Street Flood Risk Reduction project. We were not able to find another potential location for these ponds other than Adams Hemphill Neighborhood Park. The project also includes improvements to existing detention ponds, a new detention pond at the Baker Center and underground detention. Multiple detention ponds are necessary to avoid worsening flooding for those living along Waller Creek downstream of the project. We cannot help one person’s flooding by shifting the problem to someone else.

After we analyze the survey results and feedback from the open house, we will develop two draft concept plans to show the community. We will conduct a second survey and public meeting to find out what the community likes and doesn’t like in these drafts. We will then use that feedback to develop a final concept plan. Concept plans are approved by the Director of the Parks and Recreation Department.

Want to be More Involved?

We are putting together a community advisory group to help us gather and interpret feedback. For more information about the group, please reach out to Zach.Jarjoura@austintexas.gov.