Juanita Jewell Shanks Craft was born in 1902 in Round Rock. Both of her parents were educators, and her father became the high school principal in Columbus, Texas.

She and her mother moved to Austin, where she attended Anderson High School until she had to put her education on hold when her mother was diagnosed with tuberculosis. Her mother was unable to be admitted to the state sanitarium in San Angelo due to discriminatory policies. The family lived in a tent near the hospital while Juanita pleaded with the staff to treat her, but her mother passed. At that point, she went to live with her father in Columbus and graduated in 1919.

Craft then attended Prairie View State Normal and Industrial College (now Prairie View A&M University), where she earned her certificate in millinery and dressmaking. She returned to Austin and earned her teaching certificate at Sam Huston College, and moved to Columbus to teach kindergarten.

After divorcing her first husband, Craft moved to Dallas and initially worked as a maid at the Adolphus Hotel. She was later able to rent out her home to boarders. Working in the hotel let her meet famous people, one of the most notable being Eleanor Roosevelt. They became friends, and it was actually Ms. Roosevelt who encouraged Juanita to become politically active.

Remembering how her mother had been denied medical care drove Craft to ensure that others would have the rights they deserved. In 1935, she joined the Dallas NAACP; she helped to sign up new members and was appointed membership chairman in 1942. As the Dallas branch had over 7,000 members by 1946, it’s easy to see how she impressed the state leaders and was appointed organizer for the entire state.

This was also the same time Craft became the first African American woman in Dallas to vote in the Democratic primary and was the first African American woman in Texas to be deputized to collect poll taxes. She was also appointed advisor to the Dallas NAACP Youth Council. Her work with children to encourage their parents to register to vote became the model for the whole country.

The 1950s brought political and social changes for Dallas and all of Texas.  African Americans were only allowed to attend the State Fair except on one day called Negro Achievement Day.  For 12 years, from 1955 to 1967, she worked with Dallas youth to boycott that day and not attend the fair except to march and picket. Eventually desegregation allowed them to attend the fair any day they wished.

Craft took on school desegregation in 1956 when Joe L. Atkins wanted to attend college at North Texas State College but was denied. She encouraged him to file a suit, and Atkins was represented by NAACP attorneys, including Thurgood Marshall. While his case was in court, Atkins became the first African American to attend college at Texas Western in El Paso. Even though he won his lawsuit, he never attended North Texas State College as an undergraduate and continued his education at Texas Western.

That same year, Texas NAACP’s very existence was threatened by the State Attorney General. The case went to trial in Tyler, which was about 100 miles from where Craft was living. The issue was that there weren’t any hotels for Black attorneys to stay in, as the hotels in Tyler were still segregated. The attorneys stayed in Craft’s home, and she drove the NAACP attorneys 200 miles back and forth to Tyler.

She then worked through the 1960s to help desegregate theaters, restaurants, city buses and even lunch counters by getting youth groups involved and picketing those places.

In 1963 she went to the White House to meet President Kennedy in acknowledgment of her work with the NAACP. She was invited back by President Johnson in 1966 for a civil rights conference, and then in 1970 President Nixon invited her there for a third time to attend the White House Conference for Children.

Juanita Craft was a Democratic precinct chairman from 1952 to 1975 and served two terms on the Dallas City Council between 1975 and 1979. She was a member of the Munger Avenue Baptist Church, the Democratic Women's Club, the YWCA, the League of Women Voters, and the National Council of Negro Women. She participated on numerous local, state, and national boards, including those of the Urban League of Greater Dallas, Goals for Dallas, Dallas United Nations, the Governor's Human Relations Committee, and the NAACP. During her fifty years of public service, she received the Linz Award, Dallas's highest civic award, and the NAACP Golden Heritage Life Membership Award.

She received many honors in the last decade of her life. Dallas named the Juanita Jewel Craft Park & Recreation Center for her. She also received the Eleanor Roosevelt Humanitarian Award for public service.

The Juanita Craft Foundation was created the last year of her life, and when she passed in 1985, the foundation donated her small home on Warren Street to the Dallas Parks & Recreation Department. Then, ten years after her death, her house became part of the Wheatley Place Historic District listed to the National Register of Historic Places. In 1985 the NAACP also recognized her fifty years of service to the organization.

She is buried in Evergreen Cemetery next to her husband. She does not have a headstone herself, but you can find her husband's headstone that reads Johnny E. Craft to the left of her space. 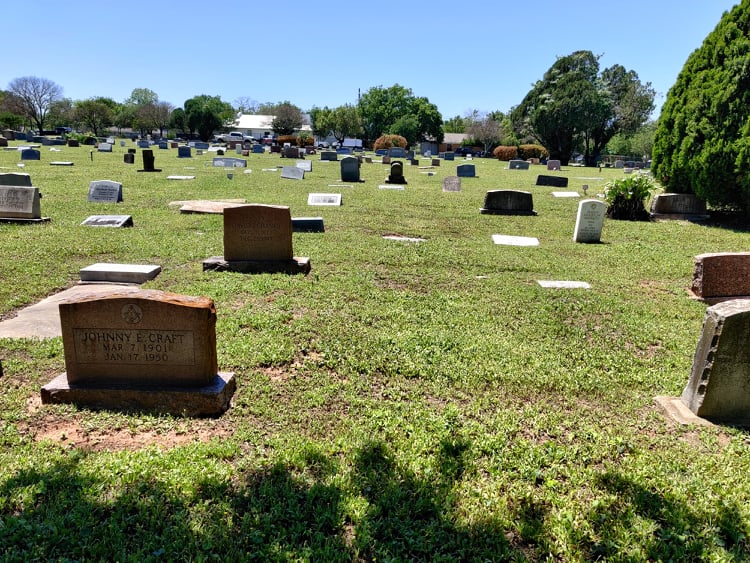