Maude Evangeline Craig Sampson Williams (1880-1958), suffragist, civil rights activist, and educator, was born and raised in East Central Austin. After she graduated from Prairie View State Normal College (now Prairie View A&M) in 1900, she moved to El Paso and began teaching at Frederick Douglass School. In 1906, she returned to Austin to teach at Gregory Town School, one of the first schools for Black children in Austin. During this time, she helped found the Douglass Club of Austin, the oldest African American women’s service organization in Austin and Central Texas that is still active today. She returned to El Paso in 1907 to be married and resumed teaching there.

In 1914, she was one of the founding members of the El Paso branch of the Phyliss Wheatley Club, a local civic organization of a national network of Black women’s clubs. During WWI she led campaigns in support of the war effort. She organized programs that promoted Liberty Bonds, Junior Red Cross membership drives, and aimed to boost the morale of Black soldiers stationed at Fort Bliss and Biggs Field.

From 1917-1924, she was the vice president of the El Paso chapter of the National Association for the Advancement of Colored People (NAACP). Just a few months after her election to the board, she held a meeting in her home for local Black and white women to discuss women’s suffrage and information for the 1918 election. The El Paso Negro Woman’s Civic and Enfranchisement League formed later that night, and Sampson was elected chairperson going on to speak at numerous meetings of women’s suffrage.

In June 1918, Williams wrote to the National American Woman Suffrage Association (NAWSA) executive Maude Wood Park to enroll her local league as an auxiliary branch. White leaders of NAWSA and the Texas Equal Suffrage Association (TESA), including national president Carrie Chapman Catt and Texas president Minnie Fisher Cunningham, wrote back and forth discussing her request. NAWSA amended its constitution the year before to ban African American leagues from being directly associated with the national organization fearing negative consequences from white southern members. The only way local groups could affiliate with NAWSA was through their state's association, which was TESA. It was determined that since the local Black group’s application for membership was the first one of its kind, it would need delegate approval but the next convention would not be until the next spring. Cunningham also said that she hoped the federal amendment would be ratified by that point, inferring TESA would not have to act on her application at all.

Undeterred from politics, Williams became campaign organizer for the prohibition candidate in the Democratic primary two years later. However, her participation was restricted as the Texas legislature implemented a law that defined voting for primary elections for whites only. Because of this, the El Paso NAACP won two Supreme Court cases, Nixon v. Herndon (1927) and Nixon v. Condon (1932), massively assisting the overturning the state’s white primary structure. 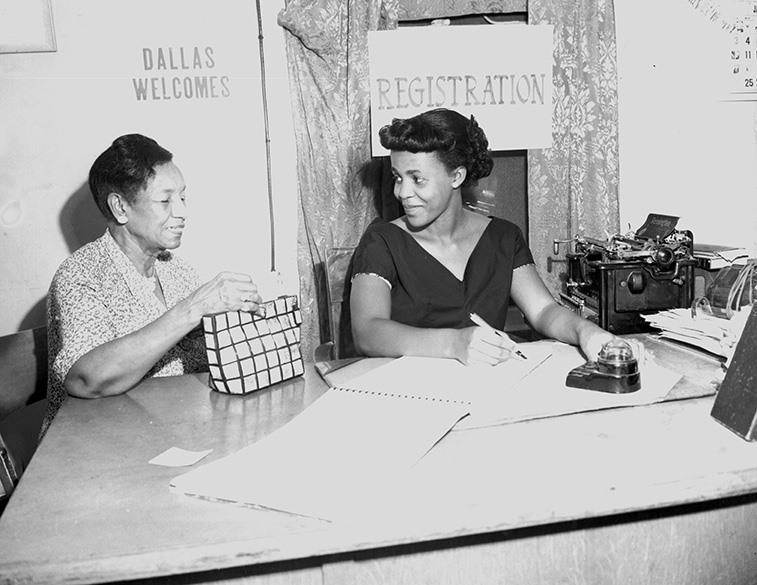 In the 1940s and 50s, she was a member of the Council of Church Women and the Women’s Federated Clubs and Societies She organized programs that promoted integration, hosted WWII Black troops, and served as trustee of the Mary L. Peyton Foundation. While serving as the chair of the Legal Redress Committee of the El Paso NAACP, she petitioned the City Council and Parks and Recreation board for more housing and leisure facilities for Black citizens, worked against the threats of Black owned property values by city subdivision plans, and fought for desegregation of public schools in four districts.

She then took on segregation in schools at the university level in 1955. Just after the Brown v. Board of Education of Topeka ruling by the Supreme Court, Williams went with El Paso's Black high school valedictorian, Thelma Joyce White, to Texas Western College (now the University of Texas at El Paso) to register her for classes. White was denied registration because of the state’s segregation laws, and the El Paso NAACP filed and won White v. Smith in the U.S. District Courts; Texas Western College was desegregated in 1955.

In 1957, Williams moved to Oklahoma to live with her sisters. A year later she was struck by a truck and passed away. She was buried in Evergreen Cemetery here in Austin near her siblings and parents.