Nancy Mahala Coleman Thomas does not have an existing grave marker in Oakwood Cemetery, but like everyone she has a story to tell.

Nancy Coleman was born into slavery in 1859 on the Meek Smith cotton plantation in Bastrop County. The exact month and day of her birth is unclear. Her father was John Coleman, who died before she was born. Her mother, Mary Clark, was a cook on the Smith plantation, and her enslaver brought her to Texas from Bowie County, Tennessee. Nancy said before her mother died, Mary Clark wanted her children to remember where she was born and where she grew up. Coleman was the mother of eleven children--two boys and nine girls. Nancy considered herself sassy because she heard that her father was independent and sassy.

In 1879, at the age of nineteen, Nancy Coleman married Jerry Thomas, who was born in 1842. Jerry served in the United States Colored Infantry from 1865-1868. Nancy and Jerry had three girls: Pearl, Ettie, and Bennie Eva. Jerry died in California in 1905.

In 1882, Nancy went to work for J. S. Hogg’s family as the cook. When he was elected governor of Texas, she lived in the governor’s mansion located at 1010 Colorado Street. In Nancy’s narrative, she talks about how fond she was of the Hogg family.

Nancy owned her home at 1208 East 10th Street, Austin. She said that Black people in East Austin thought of her as their banker because she had a steady income. Whenever anyone needed a loan, they went to Nancy.

In 1918, Nancy became President of the Home Woman’s Mission Society #4 in Austin, and she was active in its work until 1930. Nancy died December 12, 1938 at the age of 78 and was buried in Oakwood Cemetery on December 15th. The sexton’s record states she was buried in Section 4, “Colored Grounds.” 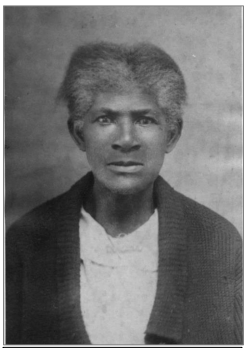 Much thanks to Kay Boyd and Megan Spencer of Save Austin Cemeteries for this biography.