Known locally as the founder of the Austin Ballet Theater, Stanley Hall was born in Birmingham England in 1917.

He began training in ballet at the age of twelve when a track and field coach suggested it as support training for sprinting, and with family in the theater it was a natural fit.

By sixteen he had become an apprentice with the Vic-Wells Ballet after training for years with the Royal Ballet of London, working under Dame Ninette de Valois and Sir Frederick Ashton.

During World War II Hall served in the Royal Navy on the H.M.S. London as a signalman. Over the course of the war his ship spent 14 months in the North Atlantic escorting Russian convoys and he later joined the Indian Ocean Fleet. While with them he earned a certificate for crossing the equator. He prized this certificate and kept it on display in his home.

After his service, Hall rejoined his old ballet company, but went on to dance with Britain’s Metropolitan Ballet Company and joined the traveling dance troupe Les Ballets de Paris in London, which took him all over the world.

He was touring with Roland Petit’s 1949 Carmen when the presenters backed out of the American tour, stranding them in Seattle, Washington. This proved to be a turning point for him as it turned out Petit had a friend in Hollywood, Howard Hughes, who brought the entire company down to film Carmen at the RKO studios in Southern California. Even though the production closed down before it was finished, Hall caught another break when Petit was hired to choreograph Hans Christian Anderson. This production is what launched his twelve year career in Hollywood, Broadway, television specials, and nightclub performances where he was able to work with celebrities like Agnes de Mille, Gene Kelly, Hanya Holm, Mary Martin, Bob Hope, Jane Russell, Cyd Charisse, Abbott and Costello, and so many more.

By 1966 he was ready to retire from performing and was offered the position of artistic director with the Austin Civic Ballet. He moved to Austin in 1968, also taking a  position with the University of Texas as a ballet teacher.

He served as artistic director of Austin Civic Ballet until 1972 but split with the board of directors. The conflict publicly focused on Hall’s choice to substitute a production of  Cinderella for the regular production of The Nutcracker with board members contending that The Nutcracker was an American (and Austin) Christmas tradition that provided a major source of annual ticket sales and should be the de facto performance for December. Hall, however, argued that he had chosen Cinderella for performance quality reasons, though there were more than a few rumors circulating that the true reason for his being removed was due to his homosexuality.

Several other board members, a handful of instructors, and most  of the dancers left along with him.

Hall and the board members, dancers, and instructors who left ACB with him formed the Austin Ballet Theatre in February 1972. The Theatre became known for performing at the Armadillo World Headquarters, a large bar and music hall in South Austin that played rock and country music on most other nights. Despite this, by the next year the monthly shows brought in up to 700 people with each performance.

Hall left the Theatre in 1986 after a disagreement with the board on financial decisions, and the Theatre closed soon after when they could no longer compete with the rival Ballet Austin (previously ACB).

Over three decades, he gained great renown for the training of a generation of famous dancers and was described as enigmatic, paternal, but also “an isolated man with a veneer of camp humor, a curious blend of movieland theatricality and genteel restraint.” His students described him as a friend and teacher, stating that he taught them not just ballet, but also social skills and even cooking.

Stanley Hall died on June 21, 1994, from a stroke after a fall at the age of 77. He is buried in Austin Memorial Park Cemetery.

And in 2013 he was inducted into the Austin Arts Hall of Fame. 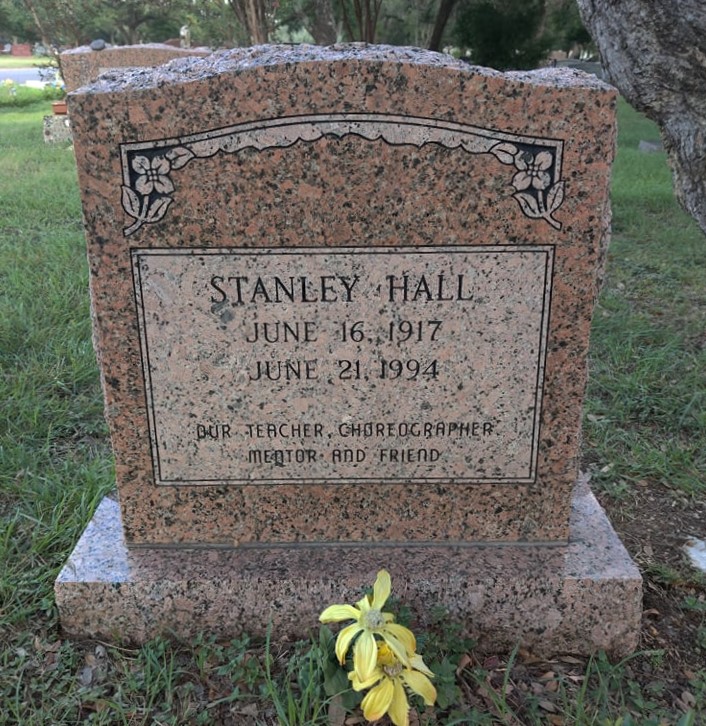