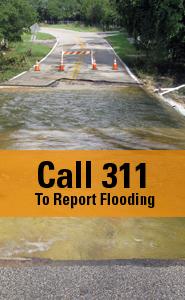 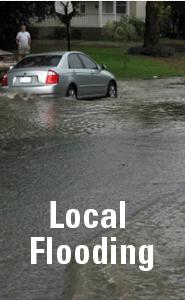 This project will improve the storm drain system near Avenue A in the Hyde Park neighborhood and reduce the risk of flooding. General project boundaries are Avenue D, W. 33rd St., Guadalupe St. and W. 47th St.

As part of this project, the City of Austin is creating a concept plan for potential future improvements to Adams Hemphill Neighborhood Park. That's because we are proposing to install two stormwater ponds at the park. The concept plan will help identify ways to maximize the enjoyment of the park for those who live and work nearby. Thank you to everyone who completed the initial survey or attended the open house. More information about proposed changes and concept planning for Adams Hemphill Neighborhood Park.

The type of flooding that is occurring in the project area is known as local flooding. It generally occurs away from creeks in areas where the manmade drainage system of pipes and ditches is overwhelmed by heavy rainfall. In this case, when the neighborhood was developed, we suspect that an entire creek or small tributary was diverted into the storm drain system and roads and possibly structures were built where the water once flowed.

The map below is turned on its side with north towards the left. It shows the proposed solution. Click on the map to download a larger PDF. 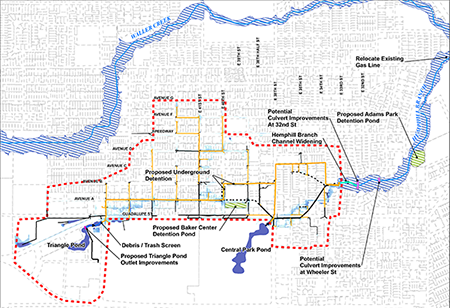 With the proposed solution, we estimate that 117 structures would no longer flood during a 100-year storm (12.3 inches of rain in 24-hours). Flood risk during small storms would be reduced for even more homes. The proposed solution includes the following:

To prevent worsening flooding along Hemphill Branch, the proposal also includes the following:

Our capital improvement projects take many years from start to finish. The process typically includes the following phases:

The project is currently in the design phase. Due to the increasing complexity and cost of the project, we are considering dividing construction into multiple phases. Construction on the first phase is expected to start no sooner than 2025. The phasing plan is not fully developed, but the downstream portion of a drainage project is always constructed first. For this project, that means the southernmost parts of the project near Adams Hemphill Neighborhood Park.

Email Stephanie Lott to receive email updates about public meetings or the completion of the study.

FloodSmart.gov
Considering flood insurance? Call your insurance agent to sign up or click on "FloodSmart.gov" above to find out more about risks and costs.