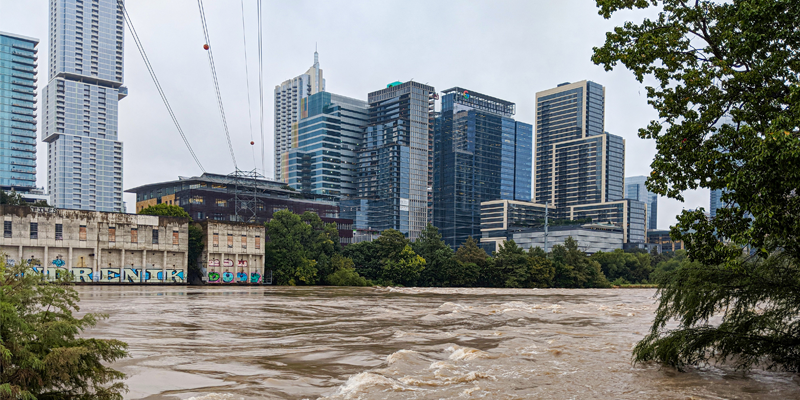 Austin Water is completing a new system at Ullrich Water Treatment Plant to handle turbidity associated with extreme flooding events. A new polymer chemical feed will help to accelerate the process of settling out and removing particles in the water, an important step in the treatment process.

In October 2018, the Colorado River system experienced unprecedented flooding that washed large amounts of silt into the Highland Lakes, Austin’s source for drinking water. Lakes that often are crystal clear appeared dark brown like chocolate milk. The level of cloudiness in the water is called turbidity and is measured regularly by Austin Water. Typical turbidity in the lake water is less than 5 Nephelometric Turbidity unit (NTU); during the 2018 flood it was greater than 400 NTU for more than a week.

In past flood events, turbidity would spike in the Highland Lakes to around 150 NTU and return to normal levels rather quickly – within a day or two. During the 2018 flood, turbidity levels remained at greatly elevated levels for a long period of time. As a result, Austin’s water treatment plants struggled to remove the high levels of silt and bring turbidity levels down to regulatory standards, which caused the need for a weeklong boil water advisory.

Following the event, Austin Water turned to experts in the field to help create solutions to prepare the utility to face extreme flooding events in the future. A report released in October 2019 called for construction of polymer chemical feed systems at Austin Water’s water treatment plants to better equip the plants to remove high levels of silt in the source water.

While design and construction for the polymer system at Ullrich Water Treatment Plant was underway for the past two years, Austin Water had materials on hand so that polymer could be used in the treatment process through a temporary system, if needed during an emergency.

“We expect to see extreme flooding events in our watershed more frequently due to the effects of climate change,” said Director Greg Meszaros, Austin Water. “Austin Water is committed to making improvements to our water treatment systems to be prepared to respond to these changing conditions.”