Most of Texas, including the Central Texas region, is experiencing serious drought conditions. Record high temperatures and low rainfall have taken a toll on the Lower Colorado River Basin and Lakes Travis and Buchanan, the source of our water supply.

With lake levels dropping and landscapes withering, many Austin Water customers are asking, “Will there be enough water?”  We share your concern. Read on to learn about Austin Water’s Drought Response and how we’ve prepared for drought conditions.

Austin Water is currently in Stage 1.

What you can do

We’re all in this together. Now more than ever, we need to take steps to save water at our home or business! Follow these links for how you can save water:

History of droughts and floods in Central Texas

The Lower Colorado River Basin has a history of droughts that are often broken by flooding events. For many decades, the 1950s drought was considered the worst drought on record.

More recently, the drought that spanned from late 2007 through 2015 has been declared the worst drought for our region and spurred numerous actions to prepare for future droughts.

Policy makers and Austin Water staff have taken big actions based on the last severe drought. Here’s an overview of updates to our drought response and planning.

Why are other cities in different stages of watering restrictions?

The State of Texas requires that all retail public water utilities with more than 3,300 connections have a drought contingency plan that is updated every five years. The Texas Commission on Environmental Quality (TCEQ) specifies the various components and drought stages of the plan, but the local utility specifies what the drought stage triggers are, as well as the actions taken in each stage to reduce water use. These considerations are based on unique aspects of each municipality, such as the source of the drinking water, water demand for that service area, and the utility’s system capacity.

Based on our drought contingency plan, the City of Austin has been under Stage 1 Watering Restrictions since June 6. It is important to note that Austin’s Stage 1 restrictions are more stringent than restrictions enacted in many other neighboring communities.

Are Austin’s watering restrictions strong enough for our current drought?

Austin has leaned into water conservation in normal weather, as well as in drought, by adopting permanent, year-round conservation watering restrictions in 2016 that reduced watering with automatic irrigation systems to one day per week. We are the only city in the state to do so. The effectiveness of these efforts is demonstrated by our reduction of per capita water usage. In 2011, Austin Water customers used over 160 gallons per capita per day (GPCD). Comparatively, the per capita usage was around 125 GPCD in 2021.

Will we have enough water since our population is growing?

In 2018 Austin Water completed a 100-year integrated water resource plan called Water Forward. That plan, adopted by Austin City Council, took into consideration a number of factors, including population growth and climate change, and identified various strategies to meet our communities water needs for the next 100 years.

Why isn't the utility doing more to respond to the drought?

Austin Water is following its Council-approved Drought Contingency Plan (DCP) that was developed with community input. The current drought conditions do not indicate that measures beyond what is in the plan are necessary at this time.

Will we have enough water since our population is growing?

Yes, Austin Water is working to ensure that that we will have enough water for our growing population. In 2018 Austin Water completed a 100-year integrated water resource plan called Water Forward. That plan, adopted by Austin City Council, took into consideration a number of factors, including population growth and climate change, and identified various strategies to meet our communities water needs for the next 100 years.

Is the City exploring other additional sources for drinking water?

Yes, Austin Water is in the early days of implementing additional water supply strategies from the Austin City Council-approved Water Forward plan, including Aquifer Storage and Recovery (ASR). Austin’s ASR project is currently in the study phase and is targeted to be completed around 2035. It will store water that the City currently has access to, allowing Austin to maximize local water resources. The project goal is to store 60,000 acre-feet by 2040.

When will Stage 1 restrictions be lifted?

What can commercial businesses do to conserve water?
Do parks have to follow watering restriction rules?

Yes, parks using City of Austin potable drinking water for irrigation must follow watering restriction rules. Auditorium Shores and Butler Metro Park use non-potable water drawn directly from Lady Bird Lake to irrigate the grounds, which is not subject to Stage 1 restrictions. Other City parks and golf courses use reclaimed, non-potable water to irrigate, which is also not subject to Stage 1 restrictions.

Can I water my home’s foundation to prevent cracking?

Yes, you may water your home's foundation on your assigned watering day and times. Set sprinklers to water the ground about 18 inches from the foundation.

How can I report a watering violation?

Report watering violations by calling 3-1-1 or using the 3-1-1 mobile app.

Who uses the most water in Austin?

Residential customers (both single family units and multi-family facilities) account for the most water use at 63%. The commercial sector that includes hospitals, schools, industrial processes and retail uses about 29% of the water available in Austin. Wholesale providers who source their water from Austin Water use 6%, and the City of Austin uses 2%. 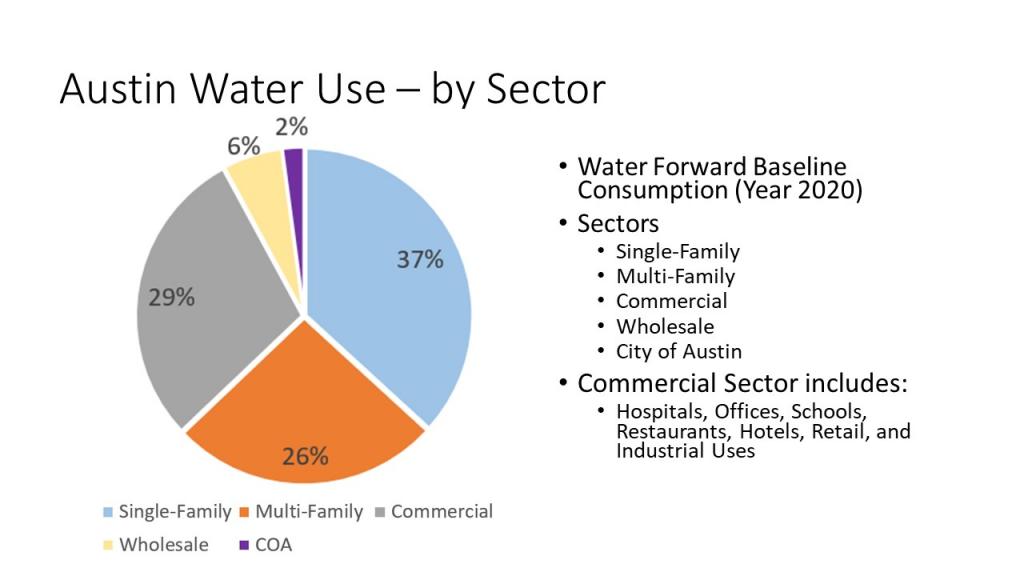 Are things getting better or worse?

The U.S. Drought Monitor tracks changing conditions across the nation on a weekly basis. You can see how things are changing in Texas over the course of the last 4-12 weeks here.