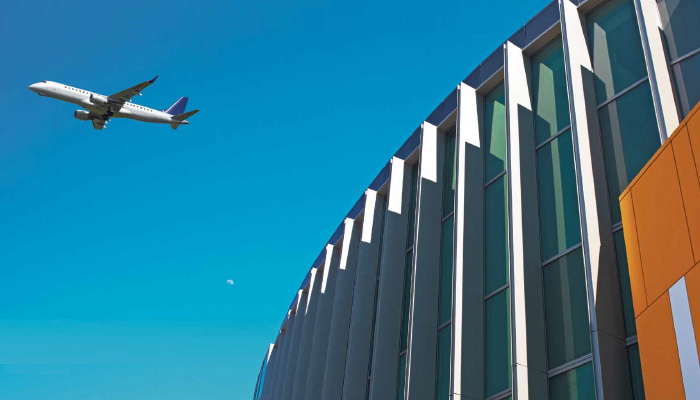 It began with the airport’s construction. Recycled materials were used in building the facility, including 100% recycled steel in the primary terminal structure. The site had been an Air Force base that operated from for over 50 years, and more than 35,000 tons of concrete from the base were crushed and reused for roadway and taxiway base. Approximately 30% of the Air Force buildings were incorporated into the new airport design, and more than 700 residential buildings on the base were sold and removed. This provided low-cost housing to the community and reduced waste.

Our hotel, the Hilton Austin Airport, had once served as the base command building. It was awarded the national Green Seal “Silver Level Achievement for Environmental Operational Commitment” for its efforts to go green. It’s one of only five hotel properties in Texas to earn this distinction, and it reflects the Hilton’s commitment to making environmentally sensitive conservation and purchasing decisions. The Hilton Austin Airport buys produce and meats from local farmers, which helps the local economy and reduces the hotel’s overall carbon footprint. The hotel also donates food and other nonperishable items to local churches and organizations.

Naturally, the central fixture of any airport is its terminal, and ABIA was designed to be environmentally friendly and a model of energy-efficiency. The heating and cooling systems are state-of-the art in efficiency, as is the lighting. The large windows of the terminal provide natural, ambient lighting – and a splendid view of the environs. The Federal Aviation Administration lauded ABIA for “Environmental Achievement”.

Environmental considerations are a major priority in the design and construction of airport facilities. Our first Silver LEED (Leadership in Energy and Environmental Design) building was constructed in 2011, in which a rental car building was renovated into a facility for ground transportation providers, like taxis. This renovation also calls for a 165-kilowatt generating solar array in the parking lot.

Since the airport opened in 1999, we’ve continued to develop ways to be more environmentally friendly. We are a partner in the City of Austin’s stringent environmental policies and the City’s vision of obtaining a carbon-neutral, “most livable city” status.

We strive for a smaller carbon footprint in everything we do. For instance, we’ve changed from harsh ammonia-based chemicals in our cleaning products to those that are green-seal rated. Water-based paints are used to mark the airfield and roadways, rather than oil-based. Even the hand soap provided in passenger and staff restrooms are green seal products. Our employees have even formed “Green Teams” to improve the recycling of paper, bottles, and cans.

Other buildings at our airport have become eligible for the Environmental Protection Agency (EPA) Energy Star label. This designation recognizes an organization’s accomplishments in energy and water conservation, and notes that facilities perform within the top 25% of their industry nationwide. Four of our buildings meet the eligibility criteria, including the Airport Rescue and Fire Fighting Facility (ARFF), the Maintenance Complex, the Motor Pool, and Planning and Engineering.

The weather can be volatile here in Central Texas and when it rains, it can pour! For us, that means managing storm water runoff in an environmentally conscientious way. The first flush of storm water from many of the airport’s impervious surfaces, like parking lots, aircraft ramps, and rooftops, is treated using sedimentation/filtration ponds. This removes suspended materials from the runoff before it’s discharged off-site. Water quality improvements at Austin’s airport include approximately two million square feet of sedimentation basins, temporary holding ponds, and other runoff controls. And it’s rare, but we occasionally have icy weather. The airport has designated aircraft de-icing areas that have collection and containment systems. This significantly reduces the potential off-site affects of aircraft de-icing fluid.

Our carbon footprint is a measurement of all greenhouse gases produced in our day-to-day activities, such as fuel use, cooling, heating, and transportation. Greenhouse gases are recognized by the EPA as being associated with the environmental problem of climate change, as greenhouse gases trap heat in our atmosphere.

It is our responsibility to ease our effect on the environment.  What we do – reducing our energy consumption and carbon footprint, recycling materials and composting brush, conserving water and controlling runoff, and more - is good for us, our community and the planet.

See how it all adds up here.